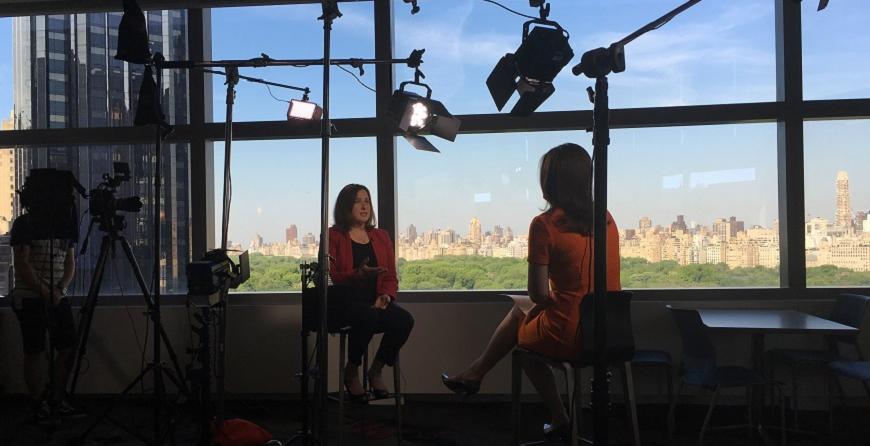 Working with the Press to Tell Our Story

I joined Citymeals at the beginning of the year as part of the marketing and communications team. After many years working with international organizations – and more than fifteen years living in New York City – I was excited to focus on the needs of local communities and help tell the amazing stories of older New Yorkers.

Part of my role is generating media coverage of our mission. I enjoy interacting with reporters, and this work gained even more significance for me in March – just a few months into my new job – when massive federal budget cuts were announced that will dramatically impact the anti-poverty programs millions of Americans rely on.

I listened incredulously to White House Budget Director Mick Mulvaney argue at a press briefing that, “Meals on wheels sounds great,” before adding that, “We're not going to spend on programs that cannot show that they actually deliver the promises that we’ve made to people.”

On social media, there was a quick backlash against the comments – meals on wheels has touched the lives of so many Americans and gratitude for our work runs deep. So it was heartening to see the public rally around us, and the press responded quickly, too.

Since then, I’ve had the privilege of working with CNN’s Erin Burnett to profile Citymeals for their Champions of Change series. Together, we followed longtime meal deliverer Mei through Manhattan and visited with 94-year-old meal recipient Connie. Our home-delivered meals allow her to live independently in the Greenwich Village apartment she has called home for over 40 years.

I also spent a delightful morning with Chef Daniel Boulud on a press shoot at his legendary restaurant in Manhattan. As our Board Co-President, he has rallied the culinary community around Citymeals for over 20 years. Nobody can describe more ebulliently the power of food to bring people together in support of each other.

And it doesn’t get more local than NY1 – one of my favorite news outlets. A few weeks ago, I joined our Executive Director Beth Shapiro in the studio with anchor Roma Torre as she discussed how summer heat affects older people and encouraged New Yorkers to check in on their elderly neighbors.

With each story, we’ve shown that Citymeals delivers on our promise and refuted the assertion that a program that millions of Americans depend on is not cost-effective.

It’s been an exciting time for me to see how Citymeals regularly delivers meals to 18,000 older New Yorkers across the five boroughs. The logistics are dizzying, and the staff who make it possible are exemplary. This kind of dedicated human service is simply not possible in other parts of the world, where there is limited support for civic mobilization. Meals on wheels is an incredible demonstration of democracy at work – an untold story that we would love to talk about more.