Gael Greene, longtime New York magazine restaurant critic, was reading the paper just a few days before Thanksgiving and noticed an article describing the plight of frail aged New Yorkers facing hunger. She was shocked to learn they were not receiving meal deliveries on weekends and holidays. “I picked up my phone and dialed the Department for the Aging (DFTA) to express outrage that in a city of such abundance, we could not care for our elderly neighbors in need,” Greene remembers.

Greene rallied her friends in the food and hospitality industry, and they quickly raised the funds necessary to prepare and deliver 6,000 meals for their homebound elderly neighbors on Christmas. Encouraged by the response, she resolved to build upon the success the following year.

DFTA Bureau Chief Marcia Stein helped make Greene’s dream a reality. Stein worked to establish one of the country’s first public/private partnerships, the first in New York City – with the fledgling Citymeals on Wheels operating under the auspices of DFTA – and became the organization’s founding executive director. Thanks to this partnership, Citymeals has been able to promise that all public donations will be used entirely for the preparation and delivery of meals, since day one.

Renowned chefs Larry Forgione and Jonathan Waxman were spearheading plans for a benefit at Rockefeller Center Plaza to mark the eighty-second birthday of James Beard and feature chefs from across the country. When he passed away just months before the event, Gael Greene and the participating chefs decided to honor Beard at the party. Every June since, we celebrate both Beard and the food world’s commitment to our mission at the Chefs’ Tribute to Citymeals on Wheels – our longest-running signature event.

While the lack of weekend and holiday meals for the homebound elderly prompted our beginnings, Greene and Stein soon realized even more was needed. The Emergency Food Package, filled with nonperishable food staples, was designed to stock the cupboards of our meal recipients over the longer winter months. Thousands of these boxes were packed at the Brooklyn Armory Terminal. “Opening the box and seeing what was in it was like opening a chest and finding many wonderful treasures,” explained a meal recipient from Staten Island.

After ten years, Citymeals was delivering nearly one million meals annually. The growing need amongst the city’s senior population necessitated organizational change. Recognizing this, Citymeals on Wheels officially established itself as an independent 501(c)(3) nonprofit organization.

From the start, Citymeals relied on the generosity of New Yorkers of all ages. With 16,000 meal recipients, we formally established our volunteer program. Over the first year more than 300 volunteers from schools, corporations, community groups and alumni associations delivered meals and smiles to their frail aged neighbors.

The majority of people receiving home delivered meals subsist on very low incomes. Because of their disabilities, meal recipients are unable to access local food pantries, an important source of help for those well enough to walk in and carry home groceries. The Mobile Food Pantry began delivering food – soups, stews, cereal, vegetables and more – in March 2011 to 150 homebound elderly living in the South Bronx.

Board Co-President Chef Daniel Boulud kicked of the new year with the launch of Chefs Deliver for Citymeals. The initiative, spearheaded with fellow board member Chef Charlie Palmer, brought together chefs to cook restaurant-quality meals for their frail aged neighbors each month. Chefs David Burke, Cesare Casella, Marcus Gleadow-Ware and Adin Langille joined them on a snowy winter day for the first delivery.

Citymeals opened The Joan & Bob Tisch Emergency Meal Distribution Center in Hunts Point, named in honor of the Tisch family and their ongoing commitment to the fight against elder hunger. The new 25,000-square foot facility dramatically expanded both capacity and resources. The opening marked the anniversary of Hurricane Sandy, when Citymeals delivered more than 63,000 emergency meals to our existing recipients and nearly 10,000 other seniors newly trapped in their homes.

On June 29th, Citymeals deliverer Andrew Smith, one of 450 frontline workers in kitchens and delivering meals across the city during the past year, delivered our four millionth meal since the start of the Covid-19 pandemic. Andrew delivered the special meal to 83-year-old Irene, who lives alone in the same Sunset Park home where she was born. “Sometimes he's the only face I see in a day,” she explained.

On Christmas Day, Citymeals marked its 40th anniversary amidst the ongoing pandemic. Since our founding in 1981, Citymeals had delivered 65 million meals to older New Yorkers in need, reminding them they’re not forgotten on weekends, holidays and in times of emergency. 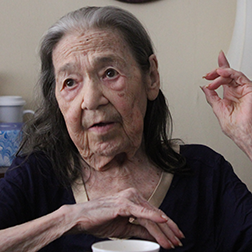 Since 1981, Citymeals has delivered over 67 million meals to our frail aged neighbors. LEARN MORE