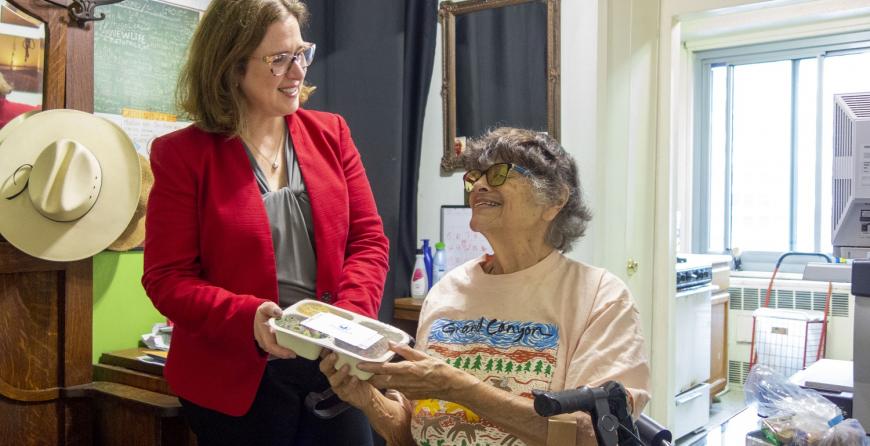 Today, Citymeals on Wheels marked a major milestone in its 37-year history with the delivery of our 60 millionth meal. I was thrilled to bring that ceremonial meal to 80-year-old Dorothy, who has lived in the same apartment on the East Side for more than 40 years. Now legally blind and unable to grocery shop, she began receiving meals five years ago.

After a long career as an emergency room nurse, Dorothy experienced an emergency of her own last fall. She collapsed at home and was found unconscious by her Citymeals deliverer, who alerted authorities and helped her get to the hospital. "He really saved my life," she admits. Dorothy is just one of the 18,414 older New Yorkers who rely on a nourishing meal and regular check-in from Citymeals on Wheels.

Today, one in five New Yorkers is over age 65. Older adults are driving the city’s population growth, and as they live longer than ever, the demand for home-delivered meals is also growing. The majority of Citymeals recipients are over 80 years old. More than half live alone and 40% never leave home. Many are socially isolated and have nobody to talk with on a regular basis other than their meal deliverer. Living behind closed doors and with limited access to food, they are the city’s hidden hungry.

After years of taking care of others, it was difficult for Dorothy to accept support for herself. But she was able to leave the hospital and return home to recover, knowing there would be a regular knock on the door from Citymeals. Today, Dorothy told me her life at 80 years old is much better than she ever expected.

This milestone holds great meaning not only for Citymeals and the City of New York, but for our frail aged neighbors who rely on us. They are the teachers, police officers, doctors and nurses who built this city. The simple act of delivering a nourishing meal is often all they need to age with dignity in their own homes and communities, where they want to be.