Learn more about the impact Citymeals has on the city’s homebound elderly in all five boroughs – from dedicated volunteers sharing what inspires them to chefs and leaders in the restaurant community lending their talents to support our mission – through these highlights of our television, print and online press coverage.

Fox Business, March 23, 2020
Feeding the Elderly During the Coronavirus Outbreak

Food & Wine, March 23, 2020
Charities Ramp Up Efforts to Feed People During the Pandemic

Town & Country, March 10, 2020
Inside the Citymeals on Wheels Sunday Supper at DANIEL

The Queens Chronicle, September 26, 2019
Citymeals on Wheels: Filling the Gaps

NY1, December 23, 2018
The Changing Face of Hunger in New York
The Cost of Ending Hunger

Epoch Times, December 21, 2018
A Family Who Exemplifies the Spirit of Giving

MetroFocus, December 20, 2018
Citymeals in High Gear for the Holidays

AM New York, October 29, 2018
Citymeals Ready for Next Sandy with New Bronx Warehouse

Epoch Times, October 9, 2018
After Retiring from the Police Force, He's Serving Others

The Cut, July 23, 2018
How I Get It Done: Beth Shapiro, Executive Director of Citymeals on Wheels

Greenline, April 1, 2018
Chefs Deliver through the Snow for the Homebound

The Nation, March 30, 2018
Who Actually Benefits from Meals on Wheels?

WNYC, January 15, 2018
A Teen Volunteer Gives Back with Citymeals

CBS 2, January 4, 2018
Braving a Snowstorm to Deliver Meals for Seniors in Need

Upworthy, June 19, 2017
Andy and Sarah Teach Their Kids the Joy of Helping Others

CBS 2, December 25, 2016
Citymeals on Wheels Delivers to Those in Need on Christmas

New York Nonprofit Media. December 23, 2016
Food and Friendship Should Never Be a Luxury

United Nations Radio, July 18, 2016
Volunteering enhances “liberty of others” one meal at a time

Toqueland, July 12, 2016
Dispatches: The Other Side of Charity

Remezcla, June 9, 2016
These 20 Mouth-Watering Dishes Are What Happens When Some of the World’s Best Latino Chefs Get Together

New York Daily News, January 23, 2016
When snowed in, think of your frail and elderly neighbors 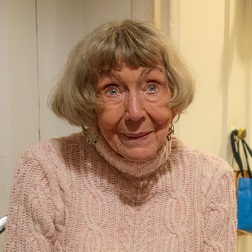 Now 88, Audrey worked at NBC during the Golden Era of television. Read more