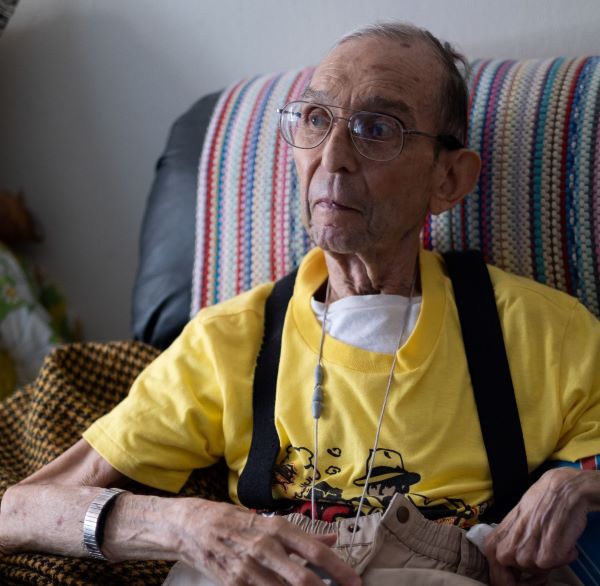 At 84 years old, Michael has spent most of his life in Brooklyn. The third of nine children, he grew up in a lively Italian family in Bensonhurst. His mother, who left her job as a schoolteacher to run the house, always encouraged Michael to study hard. After college, he was drafted into the Army, serving as a peacekeeper in Germany.

When he returned to the U.S., Michael found work in record-keeping and medical coding at Coney Island Hospital. He laughs wryly, observing that computers have now made jobs like his obsolete. On weekends, he loved going to the movies in Sheepshead Bay. But Sunday mornings were always reserved for volunteering at his nearby church.

Sadly, Michael’s days of working and leisure are long gone. More than twenty years ago, Michael felt part of his body go numb. He remembers clearly being at the sink washing a coffee cup. Suddenly, he was on the floor where he crawled to the phone to dial 911.

At the hospital — the same one where he’d worked for so many years — Michael’s doctor told him he’d suffered a major stroke. The entire left side of his body was paralyzed. It would take months of rehab before he could walk again. Even simple tasks like holding a pen had become difficult.

For a time, Michael returned to work, but two years later a second stroke left him even more incapacitated. At 65, Michael was forced to retire permanently. Though many of his coworkers were unionized, Michael’s position had never been eligible. He found himself without a pension or insurance, relying on his meager Social Security check to get by.

Michael now struggles just to take small steps at home. He used to rely on a cane, but several falls have left him weak and needing a walker. “There is very little that medical science can do for me,” he laments.

Indeed, his strength has never fully recovered since the two strokes. Unable to open the heavy elevator door on his own, Michael can hardly leave his sixth-floor apartment. That’s why Citymeals means so much to him.

On days when his deliverer brings baked ziti, Michael is transported back to his childhood when his mother would spend hours cooking and the kitchen always smelled of basil and oregano.

He looks forward to chatting with his deliverer too. “When he’s on duty, I have no worries. He knows my routine.”

Today, nearly all Michael’s siblings have passed or moved far away. He still has one sister living in Manhattan who used to visit frequently. Together, they would take a cab to a nearby Italian restaurant and enjoy a lasagna dinner. But after shattering her knee, those visits became only a memory.

Fortunately, through Citymeals, Michael was paired with Ronnie, a volunteer in the Friendly Visiting program. Before Covid-19, Ronnie would help Michael get outside. Together, they’d sit on a nearby bench, discuss the Mets and watch all the passersby.