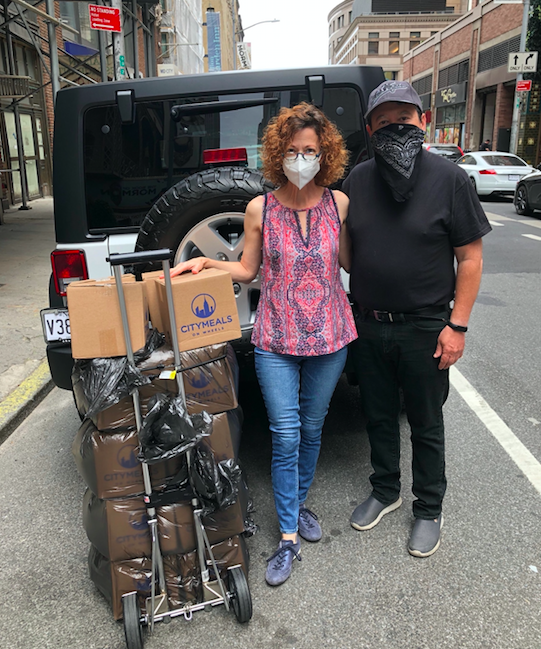 Citymeals volunteers Brian and Amy were friends in college who fortuitously reconnected online: now in their fifties, they’re newlyweds. After getting married, they only had a few months before Covid-19 shut down New York City. So they’ve celebrated their new life together in a different way — volunteering with Citymeals.

“It’s our thing,” explains Brian. “We hope it’s the first of many, but it’s the first thing we’ve been able to do as a married couple that’s independent of our prior lives.”

For Brian, it’s a personal connection to Citymeals’ mission — his late grandmother received meals on wheels in her later years. His parents, who are in their 80s, also volunteer delivering meals in Chicago. And the family tradition continues, with their teenage sons often joining them on deliveries.

“These people are so afraid and so stuck. Without an organization like Citymeals, I don’t think they would survive.”

From their home in Weehawken, Brian and Amy look out at New York City every morning. When the pandemic began, they felt isolated themselves. But they knew it wasn’t as difficult as what homebound elderly New Yorkers were going through.

Since last spring Brian and Amy have supported Citymeals in a variety of ways, from delivering emergency meals on foot to transporting donated meals from Daniel Boulud’s kitchen to meal centers across the city. “They’re getting home-cooked, quality meals that are really good,” Amy adds.

Through meal deliveries, Brian and Amy connected with Citymeals recipients who have been totally alone throughout the pandemic.

“Delivering meals, we’ve encountered older people who haven’t left at all. They’ve stayed inside the entire time. Think about the impact of that,” says Brian. “These people are so afraid and so stuck. Without an organization like Citymeals, I don’t think they would survive.”

Amy and Brian both lived in the city for years, but hadn’t realized how many frail aged New Yorkers are behind closed doors in every neighborhood. On their first delivery, they were struck that even during Covid-19, a meal recipient opened the door and reached out to them.

“He immediately touched my arm and held it tight to say thank you before he took his meal,” recalls Brian. “That was the moment when it clicked for me. We can talk about isolation, but to experience it is something that you remember."